Starting a Grunge Band in Seattle

In grade school, we were required to learn an instrument and the gracefulness of the flute was calling my name. Apparently, not that loudly, because it was given to the popular girl and all that was left was one lonely clarinet. Nobody wants to be in a cool band with the clarinet girl.

Even as an adult, the fantasy of rocking it on stage has never left. And thanks to EMP (Experience Music Project) in Seattle, Washington, my dream came true. Sort of.

The EMP museum is located at the Seattle Center, where the well known Space Needle towers over its front door. From the charming Mayflower Park Hotel, near Pike Place Market, it was a just five minute tram ride.

Once inside you will be taken on a musical journey that uses interactive technology and exhibitions to reach a multigenerational audience.

Before having the opportunity to start my official band, I soaked up the inspiration from a few exhibitions; Jimi Hendrix’s An Evolution of Sound, an extensive collection of Nirvana memorabilia, the impressive guitar gallery, a dozen interactive instruments and The Roots and Branches Sculpture, made of over 500 musical instruments.

The Nirvana exhibit is the worlds most extensive collection of memorabilia.

Some of the most fascinating relics were the letters and notes hand written by band members that were scattered behind glass cases. Pictured below is a letter from Kurt Cobain to his quasi-manager Tam Ohrmund and the bands itinerary for their 1989 summer tour.

After witnessing Nirvana, we were offered the opportunity to create our own music video.

I proceeded to force my husband to partake in an experience that mortified him and made me pee my pants with laughter. He knows that when we are 80, these are the memories that we will be sharing at the senior center. Justified.

We created a grunge band, The Winos, and rocked on stage to “I Love Rock and Roll.”

He has pleaded with me to not show the video. I am a bad listener.

So, without further ado…my fifteen two minutes of fame. 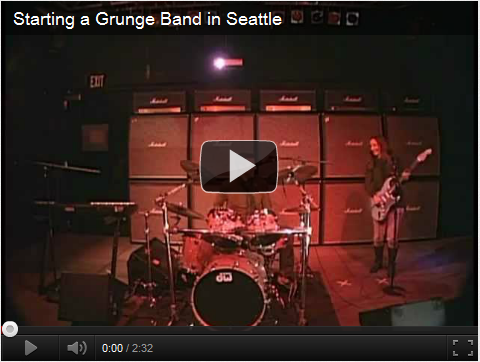 The tickets are a steal at 60 bucks a pop. It is sure to be a sold-out show

I have been to many museums in my lifetime, but not many as impressive as EMP. The exhibitions were well thought out, perfectly executed and informative, as well as entertaining.

And they made me a rock star. At least for 2 minutes and 32 seconds.

Disclosure: This attraction was sponsored by CityPASS, but all the words I write come straight from my, sometimes distorted, mind. Just as it should be.