Rose. Rabbit. Lie. Huh? Even the mention of these three little words to the locals in Las Vegas gave a facial response of a familiar, yet quizzical look. The name had been on the tips of everyone’s tongues in Sin City, but not one person had a valid explanation for exactly what it was. I was about to find out. This new concept, located at the uber trendy Cosmopolitan, muddies the boundaries between fine-dining restaurant, night club, cocktail lounge and theater show. In fact, if you were to simply call it ‘dinner theater’, you would be doing it an injustice, because it is so much more. When I researched this new hotspot there were only vague descriptions and ambiguous photos to be found. The air of mystery made the anticipation greater.

What does a girl wear to an unexpected night out in Nevada’s hottest city? Black. When in doubt always wear black.

I knew two things for sure prior to arriving for an evening at Rose. Rabbit. Lie. One was that the theater portion of the night was put on by the same folks that do the hilarious, and sometimes vulgar, Absinthe, which is one of my favorite shows in Vegas. And, two, it couldn’t possibly be anything less than stellar since it was at The Cosmopolitan. The Cosmo doesn’t do anything mediocre. 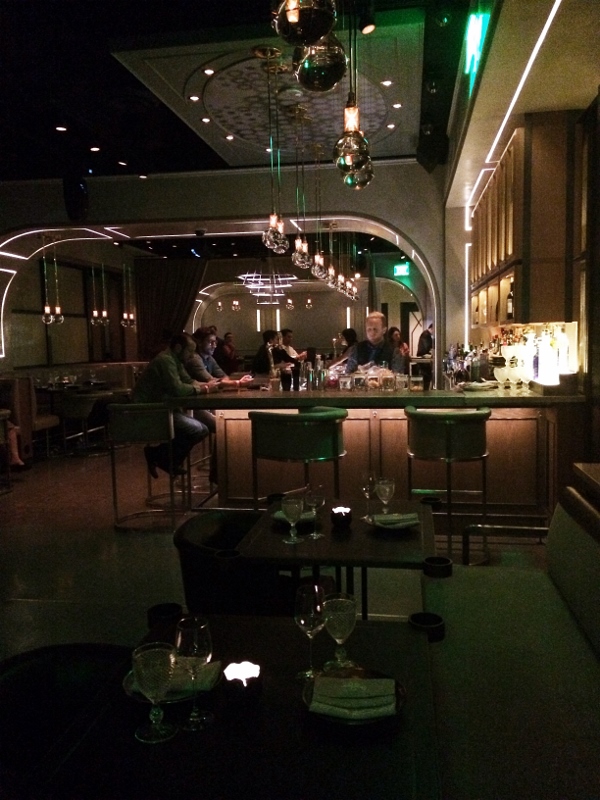 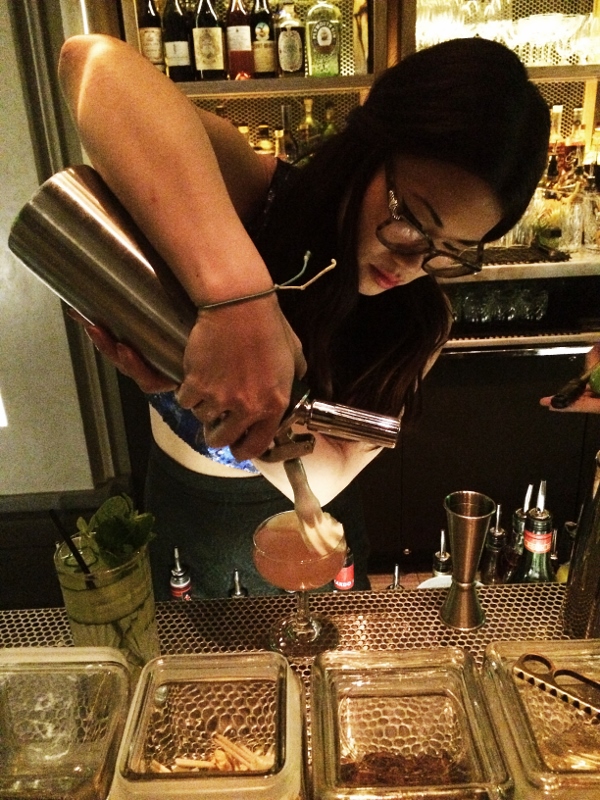 We arrived an hour early for our 8:15 dinner reservations in order to have cocktails prior. I wanted to stretch this night out as long as possible. The hostess led us through a discreet door, into a dimly lit and purposely smoky room, which all set the mood. We later learned that this was the Music Room. You must think of Rose. Rabbit. Lie. as if you are walking into a mansion, with different rooms; a study, a library, a music room, a ballroom and the pool room.

Various whimsical, unique and unexpected things happen in each.

The three of us bellied up to the bar and an expert mixologist asked what our flavor profile was in order to point us in the right libation direction. I ordered a Monkey Gland from their signature cocktail list, mostly because of the name, but a little because of the Tanqueray Malacca Gin and Absinthe ingredients. On the other hand, my male friend described a nebulous, yet complex made-up drink his taste buds were craving to our bartender. She interpreted his hazy request and created a delightful cucumber cocktail that fit his desires perfectly. All the while, a few performers were spilling into the bar from the ballroom, two rooms away. An unpredictable reverse burlesque dance, a contact juggler and a random ship captain playing chess where entertaining us as we drank. 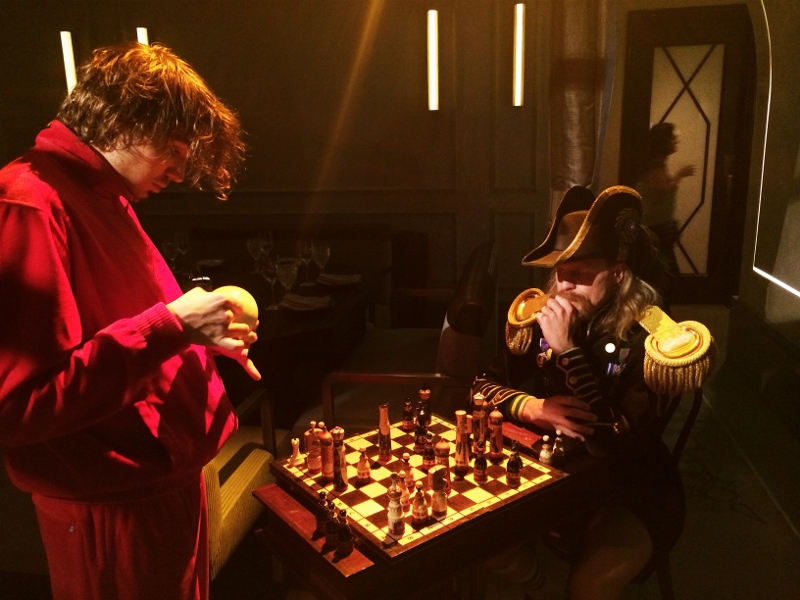 We left our seats at the bar to be seated for dinner at a cushy table in the same room. And then the food fest began. It all started with the Caviar Flatbread that donned bacon thyme and a 63 degree egg. I didn’t put a thermometer in that egg, but I bet it would have read exactly sixty-three degrees, because that is how precise everything is at Rose. Rabbit. Lie. Next came the Hackleback Caviar Tacos. Do you sense a fish egg trend going on here? I was beginning to feel like I was not sophisticated enough for a place like this. I sometimes like to curse at the dinner table and slurp my soup. But, then came the homey Brussels Sprouts with crispy chicken skin and Manchego cheese.

Can I just take a moment to thank Rose. Rabbit. Lie. for reaching beyond the typical Brussels and bacon trend?

There was a rapid-fire blur of food after that; a refreshing snow pea salad with, pancetta, pecorino & sherry vinaigrette, a unique lobster cocktail with coconut emulsion, lemongrass, mango & Fresno chile, a rabbit fricassee with rose petals and beech mushrooms, delicious crispy Oysters Rockefeller and a memorable Uni Perciatelli with Alaskan king crab, shiso and umami butter.

We were seriously waiting for something to suck. But, it didn’t. None of it. 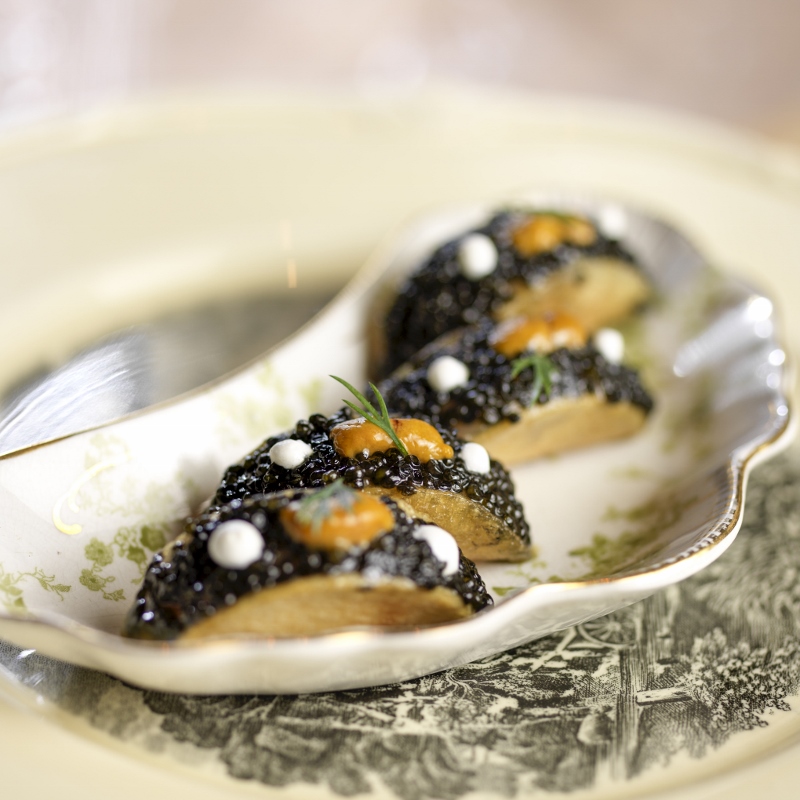 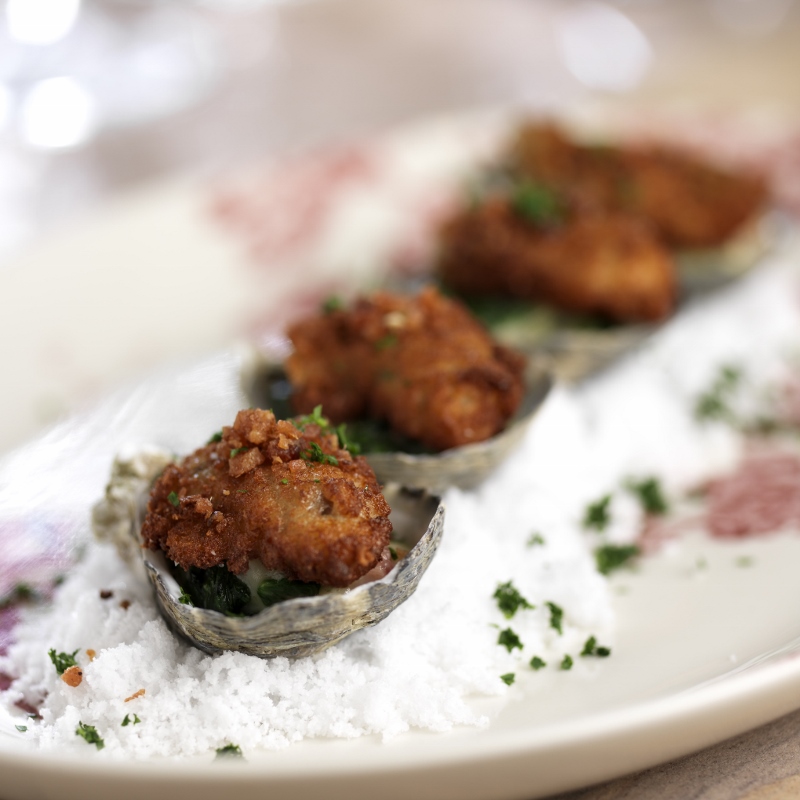 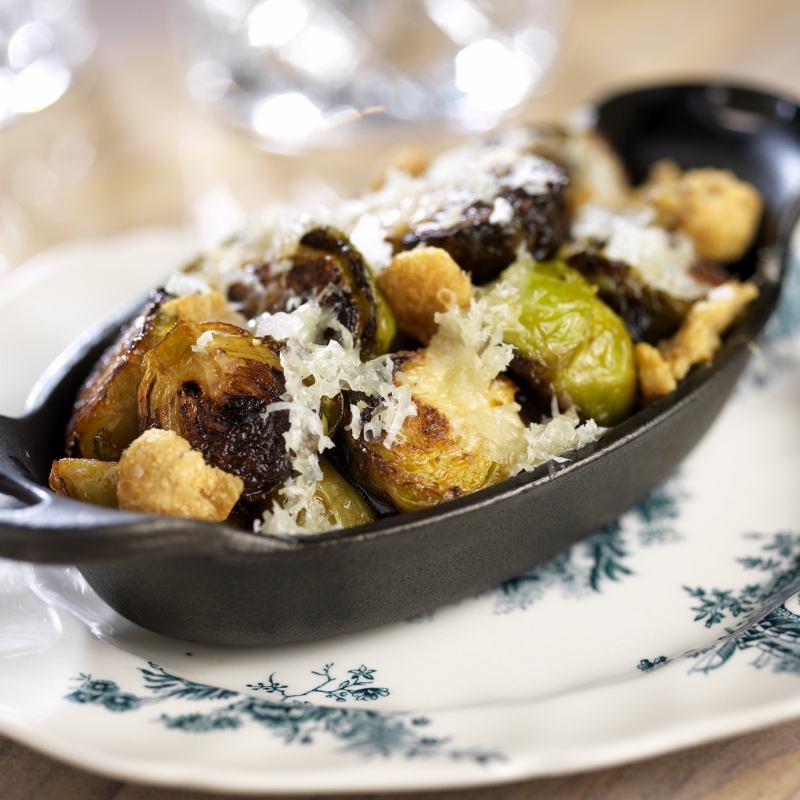 After numerous courses and overstuffed bellies, we waved the white napkin in the air to surrender, assuming this portion of the show was over. But then, there was Beef Wellington…served table side. A spectacle worthy of its own show. Everyone seated next to us gawked as it walked by. A puff pastry atrium covered the perfectly cooked meat topped with Hudson Valley foie gras, king trumpets and black truffle. My stomach happily made room. 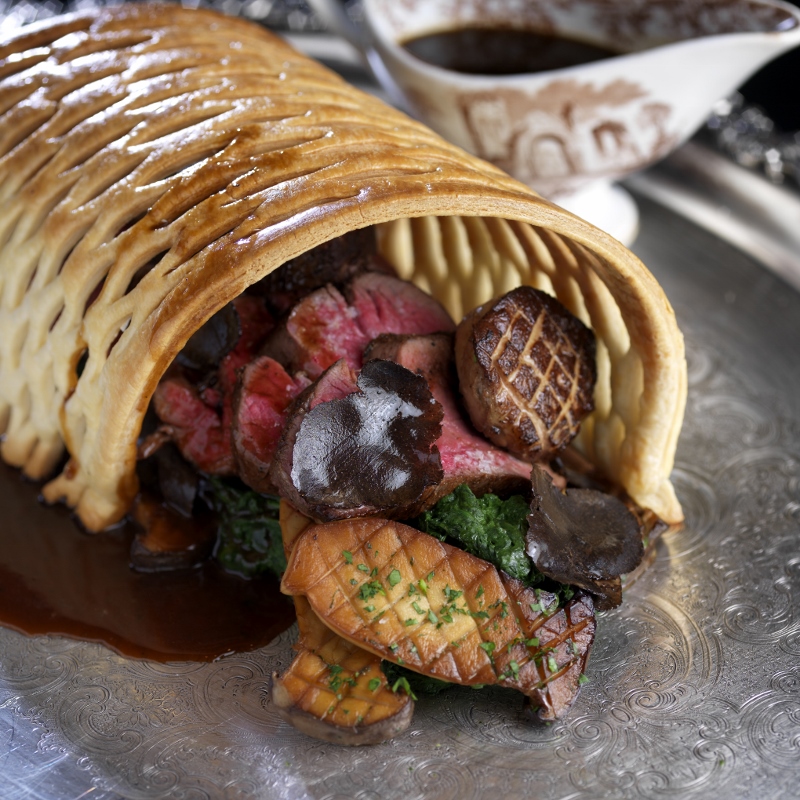 At 9:30 the walls between the Music Room and Pool Room descended and a side show started, two seductive women doing impressive acrobatics in a pool of water. Just as quickly as it started, it was over and the windows went back up closing off the rooms again.

There are three official cantos (shows) at Rose. Rabbit. Lie. And as the 10:00 showtime approached more characters and patrons started to fill the music room, the tunes got livelier and the voices louder. 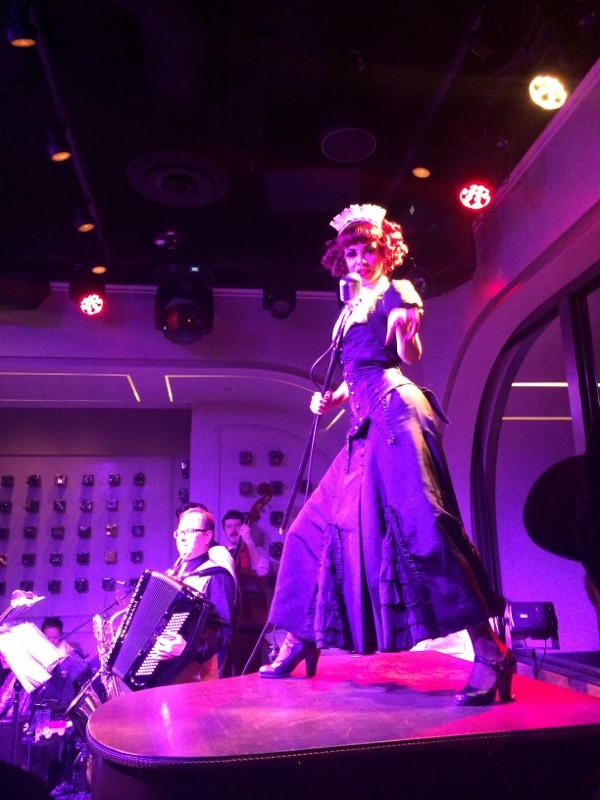 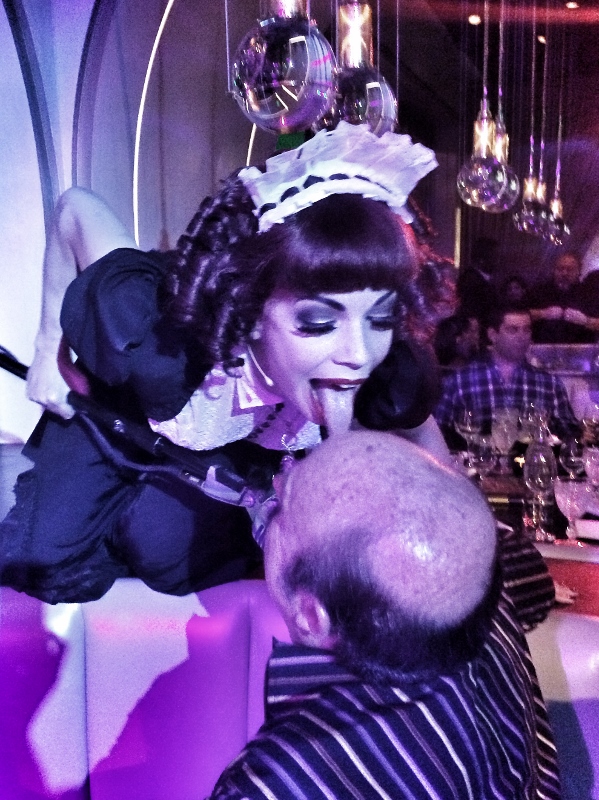 We were escorted into the ballroom for the main attraction. The mystique is a part of thrill of an evening at Rose. Rabbit. Lie., so I will not divulge too much information. But, the theme of the night seemed to be surrounded by the amazing things people can do with their own bodies and music that can be made. The show was over the top and the talent was beyond impressive. 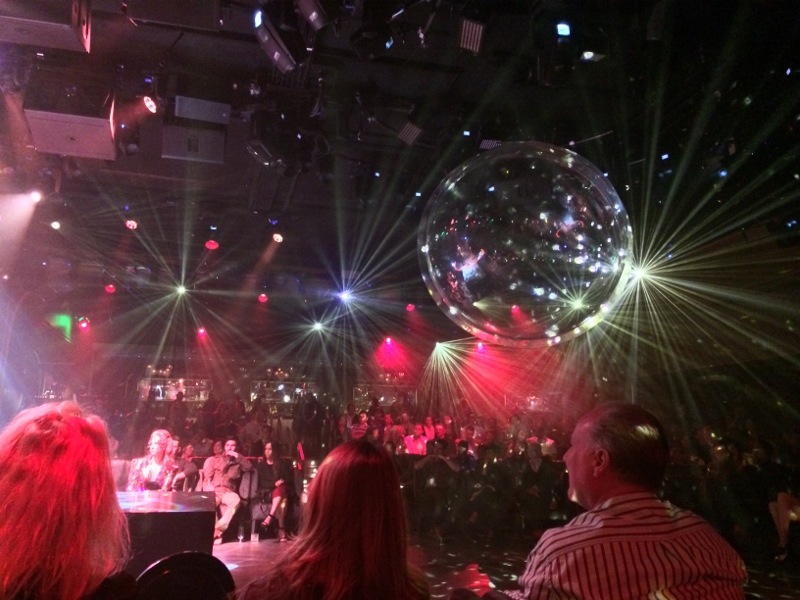 The one thing I will share is a quote from one of the last acts. As the performer stood on a pyramid of upside down cans bending his legs behind his head, he said this:

“Isn’t it amazing what people do for a living? You see what we do, I hope that makes you realize that you can follow your dreams”

A valuable lesson from a man with bendable limbs. We decided to stay for the midnight canto too, because we heard each one was different and even before it started we could tell it would not be the same. The crowd was a bit sexier, wearing less clothing and looked like the ones who could stay up all night. In other words, not me. 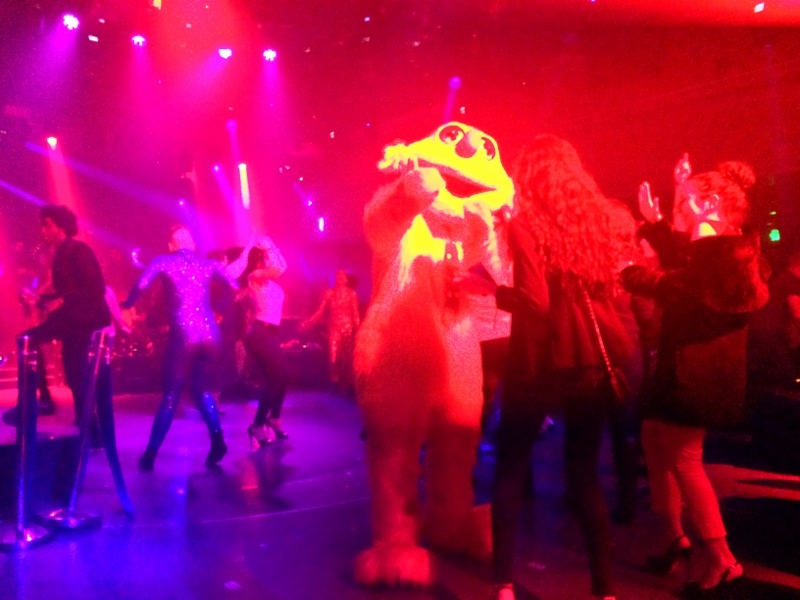 The later show was targeted at revving up the crowd for the dance party to follow, with its slow motion dancing, strobe lights, mascot style costumes, fluorescent colors and sparkles. This all made sense since after this shorter canto Rose. Rabbit. Lie. turned into one of the hippest clubs in Las Vegas and one of the very few reasons I would stay up past midnight. This memorable night reminded me of why I do what I do. To have experiences like this. Disclosure: I was a guest of Rose. Rabbit. Lie., but all the words I write come straight from my, sometimes distorted, mind. Just as it should be.